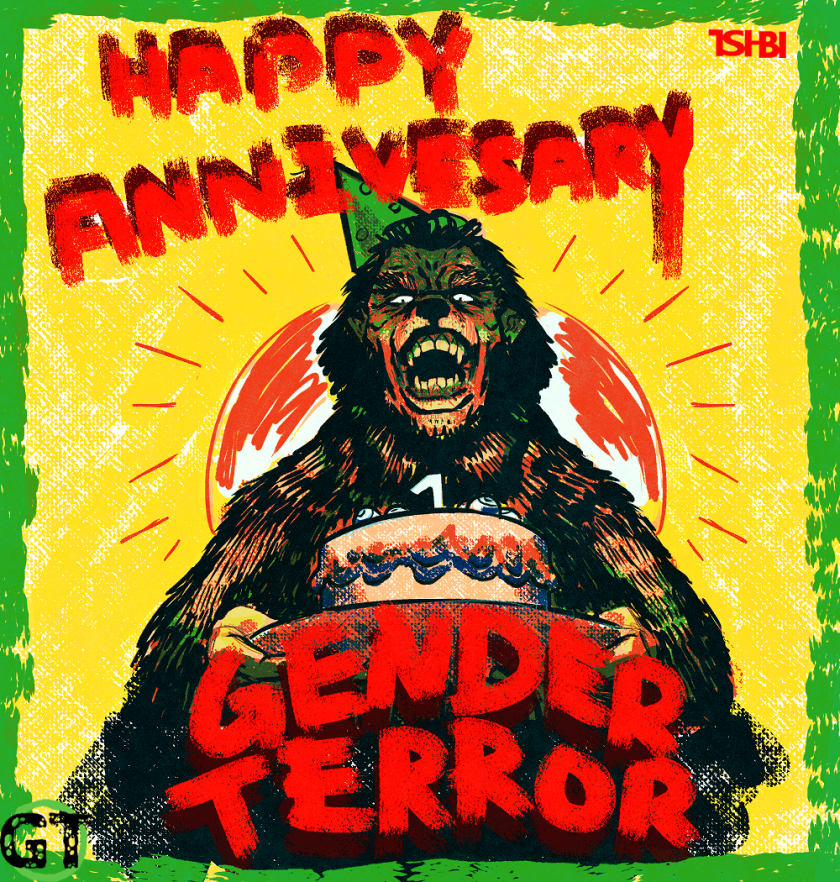 Art by Tsi-bi, who has also done The “Thing”!

Thus, on August 28 2016, I re-launched the site with Monsters Of Our Own, a piece on trans identity and monsters that continues to be extremely popular to this day. GenderTerror became it’s own special place in the queer horror world that is continuing to grow and expand.

In one year we’ve had:

The following are the top 3 posts in each category. This does not mean there is not other fantastic work on the site! Please use these as a stepping stone if you are new here and wish to explore the wonderful area of queer horror!

And as always, none of this would have been possible without the kindness and generosity of our Patreon supporters! Without them, we would not have had as many wonderful artists, writers, and contributors for the site. It is with Patreon support that we will continue to grow.

Please check GenderTerror out on Patreon!

This week will have posts as well as ending with an exciting announcement! Please celebrate with us on Twitter, Tumblr, and Facebook!

I was going to keep quiet on this for a bit, let this issue sort itself out. However, after personally dealing with and now seeing legal threats, I can’t keep my yap shut. Buck Angel’s racist, classist, transmisogynistic and sexist history is out in the open already. It is not any news to many people that Buck Angel blames trans women for their own murders via not disclosing. He used to believe that trans men should just ‘man up’ when it comes to affording surgery. He looked down upon people who asked others to help them with their surgery funds.

In reality, it seems like a pretty ok idea. The limit was 7 people with no time frame. Now, depending on the make-up of the group, and estimates the lowest range would be 7 CAFAB people sourcing for top surgery. Estimates for the surgery alone are around $6,000, meaning that $42,000 would be needed to be raised. However, in essence even MORE would have to be raised, since minimum, only 25% of profits is going towards the surgeries. The idea behind this is that these people would market their own products or services in order to fund their surgeries.  This article on the Advocate, written by Parker Marie Molloy explains the breakdown of the site, its intentions and one of the biggest issues.