“I make it very clear that if people treat me with respect, I will treat them with respect,” Brennan said on an article, recently published on Bustle. Let me give some back story on who Brennan is. Cathy Brennan, also known as Bug Brennan, is a lawyer, and also a radical feminist of the TERF (Trans* Exclusionary Radical Feminist) variety. Brennan does not believe trans* people exist. In fact, she believes that the very existence of trans* people, specifically trans* women, rapes cis women. Yes, that is correct. Brennan believes that the existence of trans women is raping cis women and cis women’s bodies.

Brennan is also a biological essentialist. She believes that biology trumps everything, despite also saying that biology does not define women. Cis women are only the ones free from being defined by biology. Anyone else is defined by their genitals, especially if they have a penis. According to Brennan, those with penises are programmed to rape those with vaginas. Also, those with vaginas cannot rape people. According to Brennan, woman on woman rape does not happen (unless they are trans women).

More recently, Brennan has supported the Pacific Justice Institute (PJI)  in instigating harassment against a trans* student for accounts of ‘harassment’ in the girl’s bathroom. It has come to light that this entire story was fabricated and there was no harassment. This did not stop PJI and Brennan from publishing her full name, her school, and other vital details. Brennan fully backs this institute, despite being a lesbian. PJI is an homophobic and anti-queer organization that lobbies for the rights of all queer people removed, including lesbians like Brennan.

So, when Brennan says that if people respect her, she will respect them, it is a blatant lie. Her beliefs do not stop at being that. She is not someone who simply is vocal. She goes beyond that. Brennan actively harasses trans women and those that support them. She has contacted the schools and work places and trans women and trans* activists with proclamations of harassment and lesphobia. Also, according to Brennan, calling her out on her trans*phobia is attacking women and lesbians. According to her, trans*phobia is a right for people to have, even when it means people may lose their jobs, be kicked from school, or even out them. She runs several websites where she outs trans women and lists them along with rapists (since according to her, the existence of trans women is rape), whether they are publicly out or not. Simply put, if you have not figured it out, Brennan does not understand what the words rape, harassment, and lesphobia mean.

Brennan is not a person who should garner sympathy to her cause. She does not want to keep women’s spaces for women only. She actively bullies, harasses, and stalks trans* people, specifically trans women. As she said in the Bustle article, “ I will tell you, it works to push back on folks because then the abuse will stop. Laws around cyber-stalking and harassment are weak. (The goal was) to stop the harassment.” This was in regards about personally contacting the doctor of a trans woman, with this e-mail:

Hello – My name is Cathy Brennan. I am a lawyer and a lesbian activist in Baltimore, Maryland.  I write because Dr. [redacted] appears to be the doctor for [redacted], a man seeking to transition to female.  See attached.

[Redacted]  regularly attacks women on social media who have a lesbian feminist political opinion.  That is, he harasses us and establishes fake Twitter accounts to harass us.  His Twitter Account ([redacted]) can be seen at [redacted] – attached is an account he established to parody me (terfprincess).

Query whether this is the kind of experience one must have to “live as a woman.” – you bully other women?  Also, I believe Dr.[redacted] has a professional obligation to know about his patient’s mental health.  I am outraged that this kind of thing happens.

I look forward to your response.

When told to cease and desist e-mails to this woman’s doctor, Brennan responded with this tidbit of information, “So you have no issue with this kind of conduct by one of your patients?  That is seriously disturbing.  Shame on you and your disregard of women and lesbians”.  As previously stated, Brennan sees any call out of her trans*phobia, transmisogyny or cissexism as an attack on women, specifically lesbians. Then again, Brennan sees the existence of trans women as raping cis women. This is not the only person Brennan has contacted, as previously stated, nor was she the last person that Brennan has harassed. For someone who believes that laws on stalking and online harassment are weak, I ponder, how will she react when stricter rules are in place and they affect her ability to harass and bully trans* people? How would she react when her websites such as Pretendbians and Gender Identity Watch, (WARNING: Brennan IP logs and will trace, stalk, harass you. Do not go to these sites if you are worried about this!) are classified as hate sites meant to stalk and harass trans women, slandering them as rapists? This is a woman that the Southern Poverty Law Center turns to to talk about issues in regards to Men’s Rights Activists and other gender hate groups.

Of course, Brennan will just paint it as her trying to protect women, as she always does. Women and lesbians, are unable to protect themselves, according to Brennan. These women need someone to threaten to sue others for them. Brennan has used her power as a lawyer to threaten to sue numerous people, websites, and organizations, for exposing her trans*phobia and transmisogyny. Brennan is the very definition of the type of person she is trying to protect others from.

I am outraged by the Bustle article that paints this person in a sympathetic light. The article paints Brennan as someone who is being picked on by trans women and other trans* activists for unfair reasons. The article makes it look like trans* people, especially trans women, are the ones in the wrong. While the article touches on the problems that Brennan has brought to trans* people, it paints these as someone simply fighting for what they believe in, a noble cause. For a magazine that proclaims itself to be a magazine for women’s interest, they are alienating a lot of women since trans women are just that, women.

This is also like a queer magazine running an article on the Westboro Baptist Church painting those in charge as people who are just fighting for the right cause, for a greater good. This is like a magazine for people of color siding with the white supremacist groups. Basically, this is something you would never see from magazines other than those who are truly sympathetic to the cause they are reporting. It is also a double standard. While social unacceptable to be racist or homophobic, trans*phobia is seen as just protecting helpless cis people, especially women, from those who do not ‘belong’. At its biggest heart, transmisogyny is not only accepted, but almost celebrated. You will never see places complaining about the inclusion of trans MEN in women’s only spaces. You will never see cis women complain about trans MEN being included, at least never in the same numbers and ways that people complain about trans WOMEN in these spaces.

This double standard is so widely accepted and allowed. People are allowed and celebrated to say trans women are biologically (read: really) male. They are not women. Biology is held as a trump card, but only where it is convenient, which is the exclusion of those who may have been born with a penis. This idea that biology is not destiny, but only for us, not for you, is absurd. You are not sympathetic nor are you respectful when you publish pictures and ideas like this: 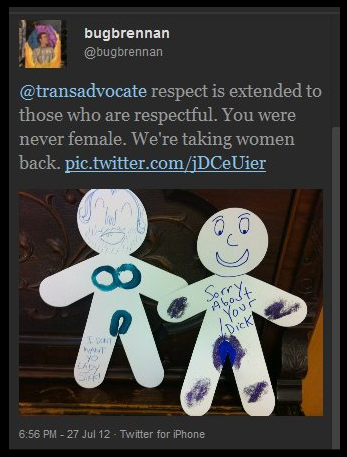 Update: The follow-up article is worse. The other trans woman they talk to, known as Aunty Orthodox on Twitter, is a known Brennan supporter and mouthpiece. She is also a biological essentialist (IE she believes trans women are really male/men, just like Brennan). This article was clearly written with trans*phobia and transmisogyny in mind. It was never expected there be another side to this story besides Brennan and her supporters.