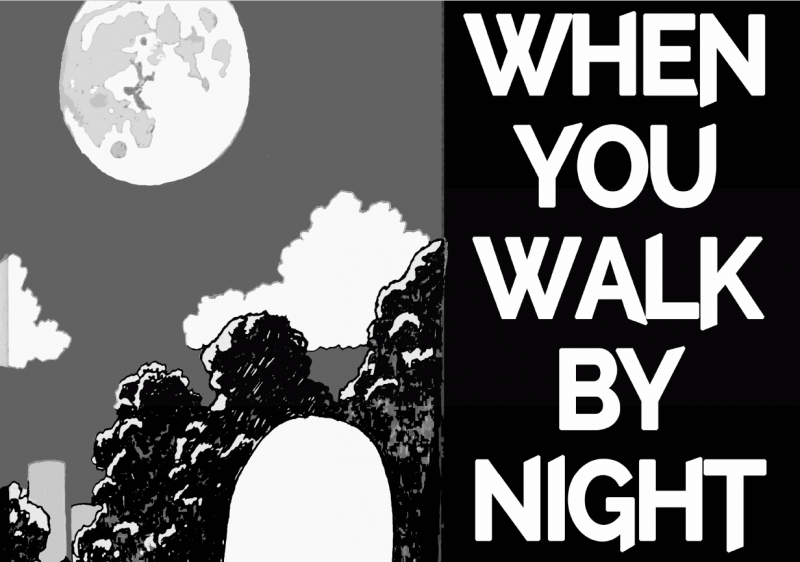 Take a walk with me to the end of your street, where the lampposts end and the darkness hides dancing, skipping horrors. Waiting for us are a Copy-cat killer who picks the wrong guy to copy. A strange epidemic that is not quite what it seems and has consequences for us all. An ancient Djiin who trades in souls and loves a twist in his deals. A girl plagued by nymphomania who is going through some deep changes. An exclusive, high class brothel with an interesting charging policy. Inter-dimensional horror on a human farm. A collector of cursed books and Objet D’Art, with a very nosey wife. A group of flatmates terrorised by a possessing spirit with murderous intentions and a sweet girl who would do anything for love. Oh! And Vampires. I can see them now. Come on, take my hand they are getting impatient…

When You Walk By Night is the newest book by horror writer and artist, Paul Bridgeman. The book features nine different stories, all with their own twists and turns. GenderTerror was lucky enough to interview Paul about not only his book, but his influences, his art, and why he feels queer horror is important.

GT: What inspires you?

PB: That is a good question. It is normally something ordinary that does it. For example in “The Art Room” I read an article about a cursed car and I wondered why the hell you would buy it? Then it stewed in my mind and I thought “How would you protect your loved ones from the curse” BINGO! Passion Illustrated was inspired by an illustration on Clive Barkers “Books of Blood Volume “ I found an illustration on the cover so handsome and sexual that I actually dreamed about him. The dreams were romantic and pornographic, I found out later that my dream man was in fact my favourite author, Mr Clive Barker and I wrote Passion Illustrated about a girl who finds a supernatural being trapped in a book cover. It can also be something that someone might say to me or something new that I try, inspiration is endless and everywhere.

GT: Why do you feel Queer Horror is important?

PB: I don’t write exclusively for a gay market, I write from my experience and to keep it real it has to reflect who I am. That said, I loved it in 1978 when I read James Herbert “The Rats” and read my first ever gay content, I was thrilled, I had thought that it was only me. It was very exciting and it calmed something in me that was worrying. I hope that any young people who are different are helped to realise that different is not wrong and that we all have a right to live the life we choose to. Gay Horror is a part of that right and therefore very important. I hope that my writing touches every gender and identity and scares them all and maybe turns them on too.

GT: What is your favorite story from “When You Walk By Night”?

PB: It is between “When You Walk by Night” the title story and “The Numb”. “When You Walk by Night” because of Todd, I don’t think I have ever written a more vile, soulless, wicked character, all my friends talk about him as if he is a real person that they know and love to hate. “The Numb” because it is the story of a group of young people rising up through the music business to global adoration and of course I love the darkness that the music journalist begins to see as he grows to know and love the group members. This was my hardest question really, I love them all!

GT: What do you think suits Horror better writing or art, as you do both?

PB: My drawings used to scare me as a child and they came from crowds of creepy and downright diabolic faces that would play on my eyelids and follow me down to dreams. So I think that by drawing them, I took control and the faces were less frightening, because when I drew them they would no longer appear in the nightly parade of creeps. When I found that I could also do this via writing, I combined the two. I made little cartoon strips and enjoyed that very much. The drawing ended up being only for my covers or sketches in my notebooks. Since I began to work on “When You Walk by Night” art immediately became part of the process for me and I designed covers for each short story. I actually drew nine covers and I was helped by Ravenswood and friends and family to pick the final cover. I have to say overall, writing is best, because it takes you on a trip in your cerebral carriage and makes any story your own personal film. Film is also amazing as it turns the whole process inside out. But! Yes! Writing is my favourite expression of horror.

GT: You mentioned that your drawings scared you as a child. Has Horror always been something you were interested in?

PB: That is a definite “YES!” even in reception area (Age four to five) I would make up stories about creepy places we all passed in our village that scared me. We had a huge crater on the common near our home and everybody wondered what was under the huge rock that was at its’ centre. I told my reception buddies that it was a magical Wizards Sword, but not to try to move the stone because it was protected by a coven of evil witches who would get them and eat them if they tried. They were so scared! Naughty really.  When they asked me how I knew, I replied “Because, I AM A WITCH” and made claws with my hands and chased them. I think they knew I made the stories up because they would ask me about places and I would make stories for them. I also liked stories that had evil fairies, monsters, witches and other nasties and when I discovered horror films I was hooked forever.

GT: Do you think that you would ever write outside of Horror and if so what? And why?

PB: I am writing two books at the moment that are very far removed from Horror at least in the usual sense. One is the factual autobiography of my husband Damian. Damian was disabled when an incubator failed, to compound this he was put back into the same incubator which promptly failed again, it is the story of how he has coped with disability, repression and abuse and how he came to be a force in local politics and Welsh Government and an inspirational lecturer both here and abroad. The book will be called “I’m Not a Spaz, I’m Safe!” (Safe is UK slang for “Cool”). I also have a collection of Dark Poetry out next year which covers the last 27 years of my life’s ups and downs! Actually! Could be classed as horror, not really though. The Poetry Anthology will be called “Fishbone Sky and the Weightless Cat” the reason for the title will become apparent when you read the book! Mwah aha!

GT: What is the hardest part of writing Horror for you?

PB: That is easy, Horror is about something intangible, something that is imagined and needs to be applied to everyday life to stand up on its merits. For me when I write a story, I constantly have to feel that my readers will not be stopping to say “AWWW Come on!!” and that means being absolutely tough on myself about what actually gets into my books and what does not. I always feel that if an interesting idea can’t weave into a story of someone with an ordinary life and job that it would be better to be written as straight fantasy than to be unbelievable..

You can buy Paul’s books on Amazon, as well as his website. Paul loves hearing from people who have read his book and you can reach him via contact on his website or on Twitter.

Lucian Clark was born and raised in South New Jersey. Recently they published their first novel, a dark romance, titled Cemetery Drive. Their works have been featured across numerous platforms such as The Advocate and in anthologies like Werewolves Versus and Postcards From The Void. They've also been featured on several podcasts to talk about horror, activism, and their writing. With a passion for all things spooky, horrific, and queer, Lucian can often be found on social media talking about werewolves, rats, and My Chemical Romance. When not actively writing or reading, Lucian is also the curator of the queer horror website, GenderTerror, which features original art, stories, interview and more. They can also be found playing video games or with their pets (currently some rats and a cat). They are active in local and national social activism with a focus on LGBTQ+ rights and reproductive justice. View all posts by Lucian Clark