We’ve all heard the stories. Books that change as you read them, predicting the future or inserting you as a character. But, what if that was true? At least, the changing as you were reading them part? Aaron Reed, author of the upcoming novel Subcutanean, has figured out a way to do just that.

A novel where no two copies are the same. Each reader gets a unique experience which means there are infinite possibilities and interpretations. GenderTerror had the chance to speak to Aaron about the concept, complications, his history with video games, and the switch from games to novels.

GenderTerror: Can you describe the general idea of Subcutanean?

Aaron Reed: Subcutanean is a queer horror novel with a twist: there are hundreds of places where different things can happen in the story, from very subtle differences to whole scenes and plot threads that appear in some versions but not others. Each time someone orders the book, the text “regenerates” to make a unique combination of these options, typesets the new text as a book, uploads it to a print on demand service, and orders the next copy. No two copies are ever quite the same.

The plot itself concerns multiple possibilities and parallel universes: the main character, an introverted college kid named Orion, discovers an impossible basement, and when he takes his best friend (and unrequited crush) Niko down to explore it, they find a lot more than they bargained for. Something down there multiplies everything: architecture, emotions, even people. The two start to realize there’s a labyrinth of overlapping realities connecting to each other in complex patterns, and as they go deeper, Orion starts to become obsessed with the possibility that maybe, somewhere down there, he can find a Niko who loves him back.

GT: Where did the idea for different books come from?

AR: My background is as an indie game designer, specifically working with text-heavy games. I started writing text adventures and then moved into experimental games that looked at different ways writing and player choice could intersect. I’m especially interested in breaking out of existing models like choosing between two or three explicit options, and figuring out smoother, more analog-feeling, less binary ways of connecting the player to a story that can change.

Subcutanean is not a game: it’s a novel that reads exactly like any other book. But I thought it would be interesting to incorporate that writing process of planning and creating multiple possibilities into traditional fiction, and put it in a form where rather than making choices, the audience just gets one single version of the story. Like the characters, they have to just wonder how else it might have happened, and what other possibilities might exist.

GT: How does that changing nature of the book affect the ending and plot points?

AR: The book doesn’t branch in totally different directions, and any two given versions won’t be entirely different novels. You can think of all the variations as like different drafts of the same core story. What if this scene here had ended with a reconciliation instead of an argument? What if one narrator comes to an understanding about himself that another never does? I wrote in a design post here about “pivot words” where a very small change in the text, even a single word, can change your whole interpretation of a scene. There’s an interview with the Stranger Things cast where they talk about filming a line from Season Three in two different ways (spoilers!): “It’s not my fault you’re not into girls” and “It’s not my fault you’re not into girls yet.” A lot of Subcutanean is about wondering what stories would be like if you didn’t have to commit to one of those being “canon.”

GT: Was it hard to find a publisher who would support this project?

AR: Yes! Which is why I’m self-publishing it. =) It’s interesting that even though the technology to print one-off books exists, the whole infrastructure around print-on-demand is still set up for static books that don’t change. For instance, most print-on-demand services require your book to get an ISBN number, which costs money. The catch is that you legally have to get a new ISBN number when the text of a book changes because it’s considered a new edition, so Subcutanean can never have an ISBN number! Which in turn means it can’t be on the Kindle store, it’s hard to get it on iBooks, listed in catalogues, etc.

The good news is that as an indie game developer I’ve had a long history of publishing my own projects, so it’s nothing new to me. But there’s been a ton of unexpected logistical challenges on figuring out how to make this project happen.

GT: Has horror always been your go to genre of choice?

AR: I’ve written horror short stories before, but this is my first long-form horror project. My past output jumps between genres pretty aggressively. I’ve done sci-fi, fantasy, 1950s period pieces, even an augmented reality documentary about war crimes in Afghanistan. I have a special soft spot for genre-blurring stuff, though: King’s Dark Tower series really hits all my buttons in the way it runs roughshod over traditional genre boundaries, and Subcutanean certainly has shades of the fantastical as well.

GT: How does your identity impact your work? Especially in a horror context?

AR: Subcutanean really grew out of reflecting back on my experiences growing up as a gay man in a red state in the late 1990s. I was incredibly introverted, and didn’t have any other queer friends, or role models in popular culture I could relate to. As a result I made a lot of mistakes figuring out how to navigate crushes, friendships, and my first few relationships: how to be honest with people, and how not to hurt (or get hurt by) the people you love. Representation has been important in a lot of my past work, but this is the first time I’ve really based a piece entirely around that time in my life, I think because it took me a long time to get enough distance and perspective on it to understand what I went through and how I grew up enough to get past it.

I’ve always been fascinated by how effectively horror as a genre can be used to explore dark parts of the human psyche, by mingling our fears of external or supernatural problems with our anxieties about inner or societal ones. Get Out was a pretty striking example of this, but almost all horror does this to some degree or another. In my own awkward and delayed coming-of-age process, I remember how painful it was to always feel like I was doing everything wrong, wishing there was some other version of me that had figured himself out, was more confident, knew how to get what he wanted out of life. The way that becomes externalized in this book into a huge and ominous physical place that the characters get lost in grew out of those anxieties and fears very organically.

GT: What made you decide to make the jump from games to writing?

AR: I actually went the other way, although I’ve always been interested in making games too, ever since I was a little kid. But I primarily identify as a writer: I make games because that’s a form of storytelling that lets the audience get even more involved. (I also love tabletop roleplaying games for the same reason.)

GT: What can you tell us about your game projects?

AR: My game projects have always been text-heavy: I tend to think of myself as a writer first and a game designer somewhere later. I’ve done a pretty broad range of stuff at this point, from tabletop roleplaying games (my most recent one, “Downcrawl,” also involved a huge underground space) to very experimental work like a game called “18 Cadence,” which gives you a huge amount of text describing the history of one particular house across a hundred years of occupation, and asks you to try to assemble some of it into a story you find meaningful. I think I’m just very interested in how people construct meaning from the stories they hear, and games are a way to let players, at times, literally attempt that.

GT: How else do you plan on interconnecting gaming and writing?

AR: I’ve been working most recently for my day job with a company called Spirit AI, which is trying to use better natural language understanding technology to improve digital games. I think we’re really on the cusp of a lot of different technologies maturing that will open up conversation as a platform for players to interact with game characters, and those characters to dynamically respond. As a writer, I’m interested in how you use that tech to tell better stories: I don’t think replacing writers with code is very interesting, but I’m fascinated by how A.I. and other tech can become superpowers wielded by writers to create whole new kinds of experiences. I look forward to exploring that more in the next few years. 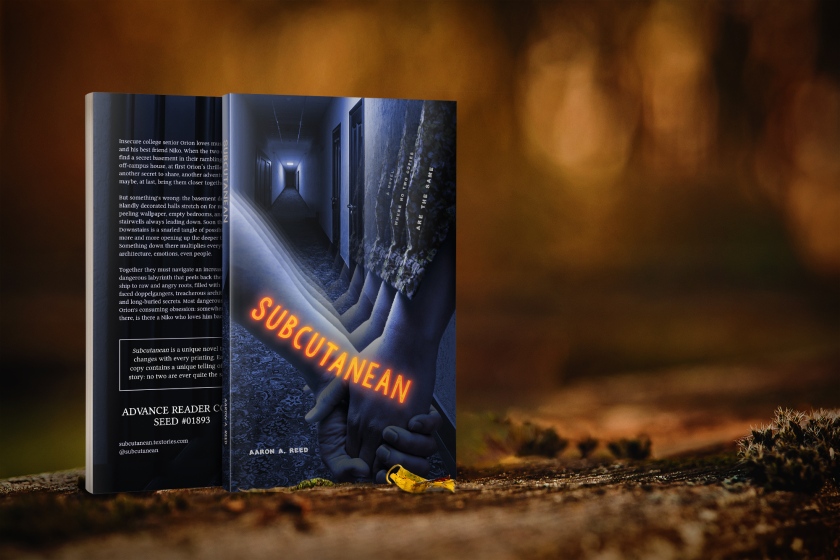 You can pre-order your copy of Subcutanean through Indiegogo. If you want to see Aaron’s other projects, they can be found on his website. For updates in real time, more information, and everything else, you can follow Aaron on Twitter.

Lucian Clark was born and raised in South New Jersey. Recently they published their first novel, a dark romance, titled Cemetery Drive. Their works have been featured across numerous platforms such as The Advocate and in anthologies like Werewolves Versus and Postcards From The Void. They've also been featured on several podcasts to talk about horror, activism, and their writing. With a passion for all things spooky, horrific, and queer, Lucian can often be found on social media talking about werewolves, rats, and My Chemical Romance. When not actively writing or reading, Lucian is also the curator of the queer horror website, GenderTerror, which features original art, stories, interview and more. They can also be found playing video games or with their pets (currently some rats and a cat). They are active in local and national social activism with a focus on LGBTQ+ rights and reproductive justice. View all posts by Lucian Clark